Everything in this tutorial is going to be explained using an example database. This example database is a simple database that serves well to illustrate various concepts. It's most likely not a very useful database to use in practice, but using it was not the intention.

This database is a variant on a common theme, a database to keep track of customers, items in stock, the different orders of the mentioned customers, the items on each order and the number of items ordered. In addition we will keep track of one bank account for each customer from which we will get the money for each order.

A database is very useful for various reasons, but if one has to choose its crowning glory it will most likely be the fact that one can get its data in a nearly endless variety of ways. That means one can create reports to show just what one needs. In our example database we can get reports for such complicated questions like who bought two or more of item a, but not item b, and had a total order amount between x and y dollars between date p and date q. Think of going through your paper records to come up with the answer to that one.

What is a table?

A table is one object or entity about which we want to keep data. Try to make these objects indivisible. For instance, keep data about an employee in one table and data about his dependents in another table. We get compound data using the relationships that exist between tables. One can have a table or tables to handle these relationships. In our example database we have tables for:


You will notice that the table has rows (horizontal) and columns (vertical). In this case the first row contains the column headings. The first column heading is the heading for the primary key. The rest are self explanatory. This brings us to the first law: in one table, column headings may not be repeated. Close on the heels of this is the second law: every row must have a primary key which uniquely identifies that row and is not repeated in that table. In the example the primary key is a single value. Primary keys can also be composite, i.e. consist of more than one value in more than one column. In this last case the total combination of values must be unique, e.g. one can have the primary key values (A,B), (A,C), (B,C) and even (B,A), all nice and legal.

All tables must be in at least third normal format for the database to work faultlessly. So, what are these normal forms?

I found the easiest to remember classification of the normal forms in a book on database design by Fidel Captain. It goes from the smallest data unit, one column in one row, to the biggest, the table.

A table is in first normal form if all column values are indivisible. Say you have an order table and in this table you have a column called items. Now for one order you enter the following values in the items column: pen, ink, paper. This table is now not in first normal form and your design is flawed. The items should be in a second table related to the order table.

Furthermore, all possible values for any column must be of the right data type and in the domain of allowed values. That's to say if you decided only to allow integers between 0 and 1,000,000 in a certain column, each value in that column should be an integer between one and a million, both values inclusive.

A column must also be unique in a table. You cannot have more than one column named 'article' in one table.

The second normal form concerns a whole row in any table, i.e. an entity in that table.

Some people will class what follows as a requirement for the third normal form. As it concerns the integrity of just one row (an entity in a table), I put it here.

Besides the requirement that every column in a row must be dependent on the the whole foreign key, it also must not be dependent on any non-key column. The classical example of this is a derived value. Say the sale table has an item price column and a column indicating how many of the specific item went into that sale, then there should be no total amount column. The reason for this is obvious: if either the price or number of items is updated, the total amount has to be updated as well. Sooner or later someone is going to make a mistake and the data in that row will be corrupt. Such a built in weakness decreases reliability of the data. Rather, let your application accessing the database do the calculation and show the total amount where it has to be shown.

One can summarise the second normal form by saying that the value of any non-key field in any table should be dependent on only the key, the whole key and nothing but the key.

The third normal form has to do with referential integrity between tables.

A consequence of the above is that if any primary key is changed, all foreign keys depending on that primary key should also be changed as a cascade effect of the change in the primary key.

If a row containing a primary key referenced by any number of foreign keys is deleted, all rows containing the relevant foreign keys should also be deleted, as should all rows containing a foreign key depending on the primary key of the second row mentioned. And so on and so on. That means just deleting one row may cause many other rows to be deleted. That will happen when 'on delete cascade' has been specified in the creation of the relevant tables. This can be disasterous. It may be better to not specify cascade deletes and just let the database refuse to delete a row which has a primary key used as a foreign key in another table. All entries with dependent foreign keys will then explicitly have to be deleted before the first entry (row) can be deleted. This decreases the risk of unintended deletions.

First of all, realise that the word many in the context of database table relationships can have any value, from 0 (zero) to any positive number. Keeping that in mind, there are three relationships:

How do we establish relationships between tables?

This is done with the primary key of one table which is used in a related table where it is known as a foreign key.

One customer can have many orders, but one order can belong to only one customer. In the preceding sentence when we talked about the customer we always used the word one, but when we talked about order/s it was plural in one case. Therefore the customer is the one (owning) side of the relationship and the order is the many side of the relationship. Remember how we establish relationships? So, we take the primary key of customer and use it in the orders table. The only difference with the one to one relationship is that this time the foreign key must not have a unique requirement, it can be repeated over and over. Many orders can belong to one customer.

Here's how it all comes together

The image shows the tables and their relationships from the example database. 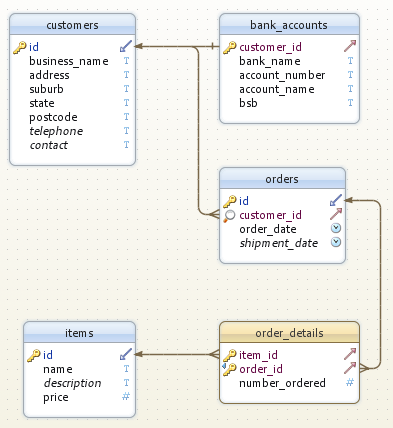 The top of the order_details table diagram is in a different colour from the rest. This is not a feature of DbSchema, but take it in this case to be because order_details is a relationship table. You can see that order_details contains the number_ordered column (also called a field) in addition to the keys. This is completely legal. In fact, this table may contain more fields. It depends what you need.

You can download an sql file that you can use to create the example database using PostgreSQL here.

This is it, then. This was only about database design. You now know enough to design a useful database. We haven't touched upon data input forms or reports, both essential components of a database application. But one can't do everything in one short tutorial.

If you find what you learned on this page useful, please use the social media widgets at the bottom and pin, tweet, plus-one or whatever this page.

Use the form below to send any comments.

Use and empty line to separate paragraphs in the "Comment" text area.

Links and html markup are not allowed.

What browser are you using? The text is against a white background in all browsers I've tested. Because it's html 5 it may not work too well with older IE, but even that's OK because of a Javascript script in the IE 8 I tested.

Can you please send me a screenshot of what you see. Email address on the contact page.

Sorry that you had problems. What about downloading Chrome, Firefox or Opera?

How is the text/background contrast now? Is it clear for everybody?

Wow, fantastic blog layout! How long have you been blogging for? you made blogging look easy. The overall look of your web site is wonderful, let alone the content! fededbcddcddegad

Thanks very much. I'm old and gray and have been doing this for some years. I'm glad you like the general appearance of the site. As esthetics is subjective, one never knows if people will like it.